Graphic Possibilities is a research workshop in the Department of English at Michigan State University. This research workshop engages with comics through two interrelated branches, critical inquiry and engaged pedagogy, as a means of bringing together faculty and graduate students with current and burgeoning interests in comic studies. Critical inquiry manifests in any number of ways through comics, including treating comics as data, comics as scholarship, and comics as critical-making, what Stacey Robinson and John Jennings term to be a methodological approach that insists scholars engage with broader critical and cultural conversations through the act of making comics. Alongside of this, we explore how scholar-practitioners can make pedagogical interventions about/through the comics medium in an effort to develop new strategies for teaching and working with comics pedagogically.

An Afrofuturist Conversation with Rodney Barnes

In this virtual interview-style webinar, we will be talking with Rodney Barnes about his work in comics. Specifically, we will discuss representation in horror comics and Afrofuturism in comics.

Rodney Barnes is an award winning writer and producer and is known for his Killadelphia comics series as well as his work on hit television shows like The Boondocks and the new HBO Series Winning Time.

The webinar registration link can be found here. 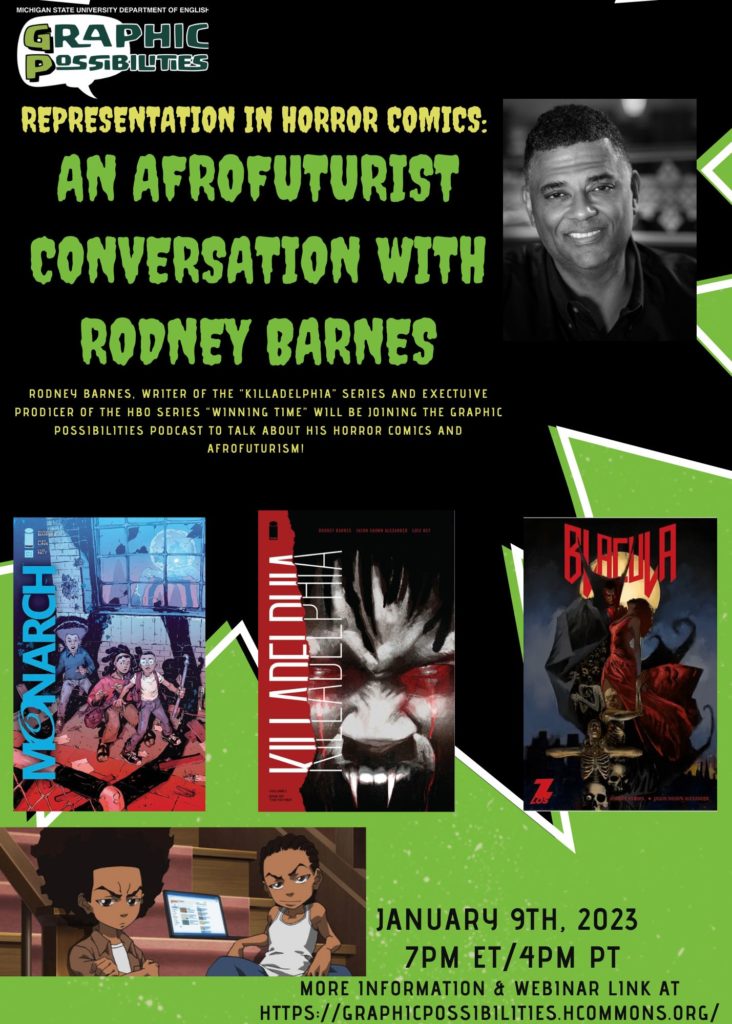 Tune in for a special episode of the Graphic Possibilities Podcast with special guest Dr. Rachel Marie-Crane Williams, the newly-minted Dean of the Division of Liberal Arts at the University of North Carolina School of the Arts (UNCSA). She is the author of Run Home If You Don’t Want to Be Killed: The Detroit Uprising of 1943 (2021) and Elegy for Mary Turner: An Illustrated Account of a Lynching (2021).

What has she learned about telling the story of race in the United States through comics? What lessons can we take from her experience in the classroom? In this conversation, we ask Professor Williams to reflect on using comics to tell stories about race and social justice.

You can find more about Dr. Williams’ work here: http://rachelwilliams.squarespace.com/

This site is part of Humanities Commons. Explore other sites on this network or register to build your own.
Terms of ServicePrivacy PolicyGuidelines for Participation